We are getting a lot of inquiries, people wanting to make sure we are okay concerning the killer tornado today.  We are, thank you for caring.

First, our home is about 15 miles south of where the big Moore tornado hit today, and 45 minutes north or so of the other tornados that hit south of us.  Intense day but no danger to our home itself.

However, we have a crazy story from today.   This weekend was my birthday, but I got dead-dog sick and Michelle and I cancelled a long awaited date we had planned for a movie and dinner on Saturday. We had rescheduled it for today.

We had movie tickets for a 3:15pm showing at Warren Theaters… the exact theater in Moore, OK that was ground zero today. If you watched any local news, or the major news stations today, you would have seen this theater on the coverage many times.  The photo on the right even shows the movie we were going to watch. 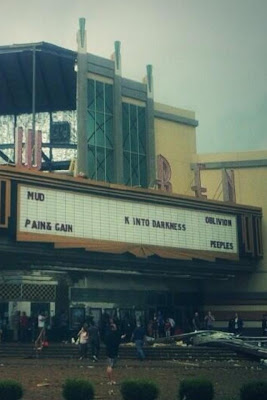 We left our house about 2:30pm with a quick peek at the news and it appeared that a couple of local thunderstorms were going to go north and south of us. We are used to spring storms so they didn’t cause us much concern.  I’m probably a little TOO unconcerned about the spring storms because I’ve lived with them my whole life, and thank the Lord, have never been hit directly though I’ve personally witnessed over a dozen tornados.  The remarkable reporting, weather coverage and alert systems give people life saving advanced warning, and maybe it makes some of us a little too secure when they spin up.  The storms today intensified very quickly, going from “thunderstorm” around 2:30pm to “killer storm” a half hour later.

At just about 3:00pm, Michelle and I were driving north out of Norman, OK towards Moore about 3 miles from the Warren Theater. It was obviously getting more ominous outside so I turned on the car radio and heard the warnings and reports. I immediately told Michelle we needed to turn around and flee south as fast as possible rather than trying to find a shelter. I knew we could put considerable distance between us and the storm since we were on the Interstate and it was clear  heading back south.

What shocked me was the hard time I had getting off the highway to exit as four lanes of interstate (I-35) traffic was barreling north oblivious to the now-obvious danger, or thinking they could get north of it in time (like trying to get across the train tracks before the train runs you over). You’ve probably seen the dozens of vehicles that were literally SMEARED across the highway directly in front of the Warren Theater in Moore. Sadly, many of those would have been on the road next to us and we either unaware, or thought they could “beat the train”.

So we did a u-turn on the interstate, drove south about 3-4 miles and got off the highway as all the tornado sirens started blaring. At exactly 3:15pm, the time our movie would have started, we watched the storm plow across the horizon knowing this monster was destroying Moore in almost the exact same way it did with the infamous “May 3rd” tornado.

It was really hard to believe that within 15-20 minutes we went from headed to see a movie in the exact location where the tornado hit, heard the radio warnings, scrambled a few miles south, and then watched from the horizon as thousands of homes, businesses, schools and lives were plowed into destruction.  We knew we witnessing a huge economic disaster and an inevitable loss of life.

Life can change so quickly. As always, we thank God that he protected us and ask Him to care for those who got hit.

I saw 29 launches when I worked on the Space Shuttle. Every time was awesome. I’ve seen over a dozen tornadoes. Every time is awesome and frightening and they dwarf even the incredible power and energy of a shuttle launch. Here is the full video of the actual tornado… it’s 15 minutes sped up to show in 3 minutes of video time so you can see the whole life of it: